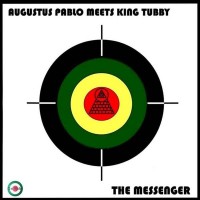 In 1975, Pablo began a fruitful collaboration with King Tubby. Their first album together Ital Dub is a classic. The later King Tubby Meets The Rockers Uptown is more than that, it is legendary. And now The Messenger is upon us, an album cut at some point in the 70s and which remained in the vaults. Should it have stayed there? No way. This is music that upholds the very high stars of their past, music which fires itself on imagination and strength, a collusion and collaboration of immense proportions, music that provides and creates moods with such purpose and drive. Pablo's melodica is centre stage but is counterpointed by contagious rhythms and touches of inspiration as horns and bass lines mesh in and out of view, held down by an ever steady barrage of sturdy drums and bass and a never ceasing source of imaginative and delightful sounds. The sound constantly changes and because it does the album contains a staggering array of moods, from upbeat into deep waters. The Messenger is forward music, still sounding as fresh as it did on the day of its conception. And it will do so for time eternal.

King Tubby Meets The Upsetter
At The Grass Roots Of Dub