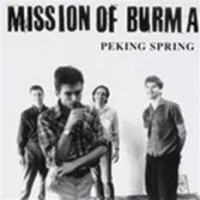 Peking Spring was originally released only on cassette in 1985, reissued on CD in 1993 and 2002 and is now for the first time available on vinyl! It's an odds-and/sods collection of previously unreleased material from all of Mission of Burma-s 1979-1982 career. The tracks are in non-chronological order, but at the heart of it are six 1982 recordings, intended for what was going to be Burma's third, but due the band's split never completed album. First time on vinyl, so it's a classic black LP (innitial run of 1000 units worldwide). Tracks A1, B4 are from the Electro-Acoustic sessions. 1980 Track A2, a Peter Dayton production was Mission Of Burma's first ever radio tape. 1979 Tracks A3-B3 are from the Radio Beat sessions. Nine songs were recorded. 1982 Track B5 was recorded at Newbury Sound. It was the first song Peter Prescott wrote for Mission Of Burma. 1981.

Mission Of Burma
The Sound The Speed The Light