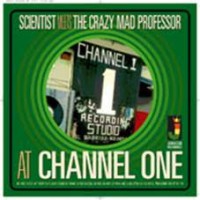 Scientist Meets The Crazy Mad Professor
At Channel One

The Mighty Scientist meets Jamaicas original Crazy Mad Professor in a dub showdown pitching their best musical shots against each other. The winner.....well only you can decide!!!.The connection between these two great Mixers/ Producers is that they both learned the trade and also cut their musical teeth working with the master himself King Tubby. Scientist (b.Overton Brownie,1960, Jamaica) and the Crazy Mad Professor (not to be confused with the London based Mad Professor, Neil Frazer , Ariwa Sounds) initially both helped King Tubby (b. Osbourne Ruddock) wind his transformers for his main business of electrical repairs. They both moved over to engineering and mixing when the need arose due to the heavy demands on Tubbys time and studio became too great.