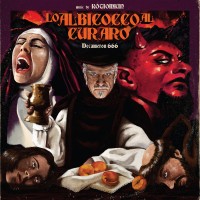 The Kotiomkin were born in 2012 from the idea of Enzo P. Zeder to compose soundtracks for imaginary films of which he himself is the author. The group is inspired by the great masters of Italian soundtracks of the 60s & 70s & 80s filtering everything through a wall of eclecticism, distortion, low frequencies and vibrations. Buffalmacco and Fra- Tazio wake up in Hell, in the Circle of the Lustful. In this bad beginning, the two cronies begin to tell each other their latest vicissitudes, in order to remember what brought them to eat those strangely bitter apricots... The fate of a nun seems to join the two damned souls. She hanged herself for shame in the cloister of the convent. But the woman-s father does not accept his loss and, overcome by sorrow, evokes an infernal Fiend and puts his trust in Him. Among ancient rites, lustful violences, unholy events and dreadful misfortunes takes place this dark Renaissance story where Desperate Revenge feasts with Iglorious Death! For the composition of their third work "Lo Albicocco Al Curaro - Decameron 666" (Subsound Records, 2018) there was a change of line up and the guitar was replaced by a massive use of vintage analogic synthesizers giving life to an album that crosses, transversally, different musical genres with an ever more relevant cinematographic imprint.