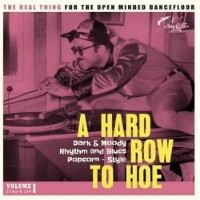 Popcorn is a style of music and dancing first established in Belgium in the 1970s and 1980s. The style includes a wide variety of mostly American and British recordings of R&Band pop music made between the late 1950s and mid 1960s, often relatively obscure, and characterised by a slow or medium, rather than fast, tempo. The Popcorn music scenefirst developed from dances held at the Groove discotheque in Ostend, where mid-tempo soul and ska music played by DJ Freddy Cousaert became popular in the late 1960s. In September 1969, a café, De Oude Hoeve, opened in a converted farm barn at Vrasenenear Antwerp, and began holding dance competitions on Sunday afternoons. Soon up to 3,000 people began attending each week, dancing in a "slow swing" style. De Oude Hoeve was later renamed Popcorn and the special genre had it's name. Later on the DJ's messed up a perfectly fine recipe by adding all kinds of pop tunes as long as the groove was right. The typical Popcorn tempo was usually reached by pitching the record up or down, sometimes massively. This record features 14 pure Popcorn groovers from the "golden era".TracklistingA Side1. Big Daddy - Daniel Webster And The Devil2. Lou Johnson - It Ain't No Use 3. Ronnie Hawkins & The Hawks - Southern Love 4. Roy Brown And His Mighty-Mighty Men - She's Gone Too Long 5. Sam Fletcher - I'd Think It Over6. Ivory Joe Hunter - I'm Cuttin' Out7. The Sims Twins - It's A Sad Thing Side B.1. Roy Gaines - Black Gal2. The Pilgrim Travelers feat. Lou Rawls - Motherless Child3. Otis Lee - A Hard Row To Hoe 4. Jack Grayson And The So And So's - Go Ahead On 5. Landy McNeil - Move It (Move On)6. Maylon Humphries And The Tri-Seniors - Weep No More7. Louis Jordan - 65 Bars