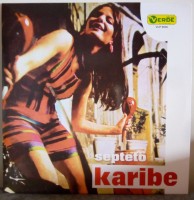 The Septet Karibe was a group that was born before 1967 in Caracas, Venezuela. Its members were young people from Caracas neighborhoods with remarkable musical tendencies. At first they used the harp, but after the arrival of Hernán Marea's piano defined their characteristic sound.Its style contained rhythms like Montuno and Guaguancó whose arrangements, in certain basic way, were created in group, as well as all the songs, except for 'Olvídate de Mí' ('Forget me of me'), of Louie Ramírez. The direction was in charge of the percussionist José Amable López, known as 'El Flaco Amable' ('The Kind Skinny Man), former member of the Los Melaos quartet, which is why the first cut on the A side is titled in the same way.The Septeto Karibe was welcomed by the public from different nightclubs in the El Rosal neighborhood of the Venezuelan capital.This, his only record, did not have the backing of the mass media, in such a way that the work went unnoticed.Today, it is one of the most sought/after albums by collectors.