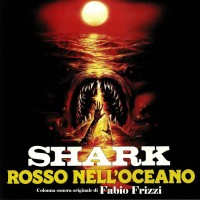 A breaking release'co-produced with Ribot, long/time publishling company of Maestro Fabio Frizzi, of the score for Shark rosso nell'oceano (aka Devil Fish), another chapter in the DDJ series in which Beat continues releasing scores of a more potent and dynamic flavor. Directed by Lamberto Bava in 1984, Shark rosso nell'oceano marks one of two collaborations between the director and musician (the other being Blastfighter, released the same year). It's an aquatic monster movie, a spin-off of the most popular adventure & horror movies from the other side of the ocean, dedicated to the ancestral fight between man and shark, the latter portrayed in a more horrific and evolved, almost alien, shape. The score presents a real treat for all fans of the Maestro and 80s electronic & synth sounds, never before released and now available thanks to the miraculous discovery in an old archive of a multitrack master tape featuring the original recording session on separate channels. Thanks to an accurate restoration and new mix by Alessio Contorni at Octopus studios (supervised by Maestro Frizzi), it was possible to produce an LP featuring the score of this rare soundtrack, yet another example of the fascinating compositional style of the Maestro during the period (including Zombie Flesh Eaters, The Beyond, City of the Living Dead, etc.), music which has become iconic in the collective consciousness of horror and thriller music lovers. Incidentally, on his "Zombie Apocalypse" world tour, the Maestro performs a suite from this score during the concert, always among the most appreciated moments at these events! The LP comes in a black 180 gr edition with liner notes by Fabio Frizzi and graphic design by Daniele De Gemini and Alessio Iannuzzi.