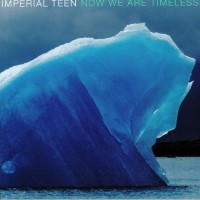 Imperial Teen
Now We Are Timeless

The band wrote and recorded the new album in the cities the individual members have geographically gravitated to, New York City, the Bay Area, Denver, and Los Angeles. Themes of time and movement, averting and succumbing to crisis, dealing with loss and pain are all represented on the record, but what rings triumphant is the undeniable joy and catharsis that come from the band's spontaneous and improvisational approach to making music together. In strict keeping with the band's roots of creating seemingly clean, pop presentations as a springboard for dramatic themes of loneliness, triumph, suicide, success, and failure, Now We Are Timeless moves us into a realm of inevitability for the band. While Seasick, the band's first release, thematically touched on the queasiness of pop and beach and sun and glare and the optimism that lies beneath, the new release serves as a bookend of sorts in its portrayal of a world in crisis, a frostbitten but melting iceberg, monolithic and stationary yet impermanent and resonant.

Dum Dum Girls
He Gets Me High Ep