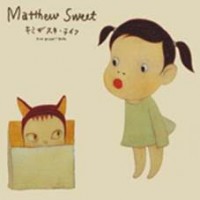 Originally released on CD in Japan in 2003, as a love letter & thank you to his Japanese fans. Recorded at home, produced, engineered & mixed by Matthew Sweet (bass, guirars & vocals) with the classic 'Girlfriend' era lineup of Ric Menck (drums), Greg Leisz (guitars) and the genius electric lead guitar of Television's Richard Lloyd. The sleeve art is by renowned artist Yoshimoto Nara. In the liner notes, Sweet describes the album's title as an attempt at reverse English "If I did it correctly, the title should seem a little strange or wrong, but still meaningful! The true definition is supposed to be a 'love you- life, one devoted to loving someone or something, even life itself!"