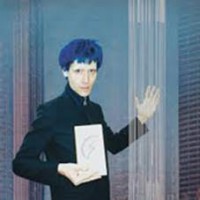 Brion Starr is a singer, artist and actor based in New York City, though this debut album was recorded over three months North London's Konk Studios (home of childhood musical heroes The Kinks). This followed a year and a half touring with The Noh Starrs after releasing their eponymous album via Modern Sky in 2017.Along with former bandmates Robbie Wood and Lida Fox, Starr follows the experimental drone and psych-rock elements of their debut album aligned with cut-up pop structures and free jazz contributions by Matt McAuley of TV Baby/ A.R.E Weapons. Starr then explores musique concrete loop based tape compositions and ambient meditations on the latter half of the album with harpist Marilu Donovan.

Erickson, Roky
All That May Do My Rhyme