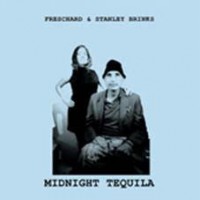 Midnight Tequila is an irresistibly charming collection of late night tales, woozy ballads and uptempo sing/alongs. Clemence Freschard's beautiful vocal tones lend this a rich, French indiepop&chanteuse vibe, complemented by Stan's wistful tim/bre and characteristic warm instrumentation. Perfect accompaniment for that late night tequila. Stanley Brinks is renowned for his unique anti/folk style> both playful and suggestive, insightful and entertaining.. Freschard grew up in a farm in Burgundy. Aged 18 she moved to Paris, where she baked pies and cakes in a cafe. There, a local musician and regular customer called Stanley Brinks wrote a few songs for her to sing. Homeless in Paris, she saved up just enough money to get herself a ticket to New York. There she found an old electric guitar and started writing her own songs. In 2004 she moved to Ber/lin, where she recorded her first LP, @Alien Duck@.

Flowers
Do What You Want To, Its What You Should Do