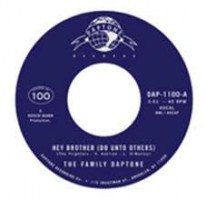 Daptone Records is celebrating a milestone by releasing their 100th 45rpm vinyl pressing, dubbed Daptone's 100th 45> The Daptone Family. The label has been home to many icons, such as the late Charles Bradley and Sharon Jones. Today, they-re sharing the A/side, a song called -Hey Brother (Do Unto Others)- honoring the life of some of its musicians.The song was written by reggae group the Frightnrs and released on their last LP, -Nothing More To Say-. However, right before the album-s release in 2015, the band-s singer Dan Klein passed away following a battle with ALS. As the label explains> 'we felt it to be a fitting tribute as well as an ideal composition to re-imagine as a soulful collaboration between all of our dynamic vocalists'.Thus, performing on the track alongside the late Bradley and Jones are Saun & Starr, the Frightnrs, James Hunter, Naomi Shelton, Duke Amayo, and Lee Fields, backed instrumentally by members of the Dap-Kings and Menahan Street Band. The B/side, -Soul Fugue- is performed by the 100 Knights Orchestra, a massive ensemble comprised of every horn player the label has ever worked with (really!) including current and past members of The Dap-Kings, Antibalas, The Budos Band, Menahan Street Band, The Extraordinaires, The Soul Providers and the Daktaris.

Redding, Otis
It's Not Just Sentimental

Funkadelic
Standing On The Verge Of Getting It On (westboud)