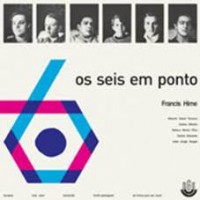 Francis Hime has been a fundamental artist of Brazilian music since the mid-1960s as a pianist, singer, composer, arranger and orchestra director. "Os Seis Em Ponto", released in 1964 on the prestigious RGE label, was his first album, recorded as part of the band of the same name.Hime's rhythmic piano swings between bossa and jazz along the entire record with the typical groove of the then emerging Brazilian sound.The instrumental depth of the album, featuring the brilliant backing of the flute and the trombone and theeffective guitar of Nelson Motta, does not diminish the infectiousness of its songs, a wonderful repertoire by such solid composers as Carlos Lyra, Roberto Menescal or Castro Neves, as well as absolute legends like Vinicius de Moraes, Antonio Carlos Jobim or Edu Lobo.Presented in facsimile artwork and pressed on 180g vinyl.TRACKLISTSide 11. SAMBA DO CARIOCA2. INUTIL PAISAGEM3. MAR AZUL4. LUCIANA5. BORANDA6. AMOR A ESMOSide 21. A PAZ DE UN HOMEM SO2. SEM MAIS ADEUS3. SE VOCE PENSAR4. CANÇAO DA LIBERDADE5. SO TINHA QUE SER VOCE6. O MENINO DAS LARANJAS

Various
In Search Of The Cool