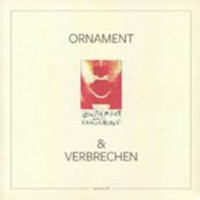 In 1988, the legendary freakwave outfit Ornament & Verbrechen handed out some 20 to 30 copies of their "Rotmaul-Tape" to friends. The band, formed by the Lippok brothers, emerged from the first East Berlin punk group Rosa Extra and the avant/wave project Fünf Wochen im Ballon. From the moment of O&V' inception, the band was the wellspring for many acts that would subsequently branch off as tributaries and streams in the East Berlin underground music community. Bands like Aufruhr zur Liebe and projects like Corp Cruid, The Local Moon and Bleibeil originated in the environment or from the collaboration with aband that functioned like an open house in the closed institution GDR. By 1995 To Rococo Rot and Tarwater had formed from this tried-and-tested framework, pursuing the templatewithout copying it. After the GDR infarction in 1989, the project Ornament & Verbrechen continued to glow, sparking new ideas and flaring up again today.'Tapetopia' is a series of vinyl releases based on cassettes from the East Germany's 80s underground, particularly from the East Berlin "Mauerstadt" music scene, featuring original lay-outs and track lists. For over 30 years after their initial "release" the music on these tapes was neither available on vinyl nor CD, but they were important statements in the canon of the GDR subculture. Despite the miniscule number of original cassettes in circulation at the time many of the bands were popular in countercultural circles, a factor that made themhighly suspect among the government's own inner circles.