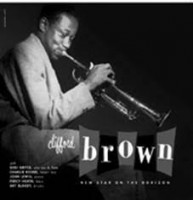 Formerly a 10 inch issued on Blue Note in 1953 on Mono, this improved reissue now features 4 bonus tracks on the B side.(From the original liner notes). The date took place just a week before Brownie took off for Europe, as a member of that vast edifice built by the master of multiple decibels, the Lionel Hampton orchestra. Like Gigi Gryce, the alto saxophonist and fellow-Hamptonian whom Brownie pressed into service for this session, the young hornman found the occasions for expressing his individual personality few and far between in so large and monolithic an organization. The opportunity to record with a small, compact group, aimed at the creation of originality and relaxation rather than intensity and consternation, was a welcome change of setting for the two eager youngsters. A third Hampton star also helped to mold this date. He had also been installed for some time in Hamp's trumpet section, but is perhaps known better as an arranger, and it is in the latter capacity that Quincy Jones, a new star from Boston, contributed two originals, Wail Bait and Brownie Eyes, for the Brown session. Completing the front line is Charlie Rouse, a tenor man whom most fans will remember from the famous Tadd Dameron conclave that produced The Squirrel, Our Delight, Dameronia, etc. on BLP 5004. Charlie has also been heard in the orchestras of Duke Ellington, Dizzy Gillespie and others.