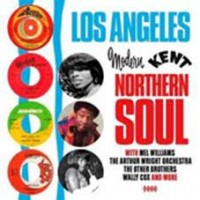 Back in stock!UK black music collectors have revered the output of the Modern and Kent labels from Los Angeles since the early days of B.B. King, Ike & Tina Turner, and the Ikettes. Much of the soul was crossed with R&B - witness the likes of Z.Z. Hill, Vernon Garrett and Johnny Copeland. Garrett's hine It On' has become much in-demand in recent years along with Z.Z. Hill's cover of 'Make Me Yours' which was a UK/only 45 in the 60s. Larry Davis' name was largely unknown until his 'I've Been Hurt So Many Times' got Northern Soul plays in the 80s and onwards. Mel Williams' storming 'Can It Be Me' is also on the tough side - it has been a dancefloor/filler since its "discovery" in the early 70s< like Jimmy Bee's manic anting You' it is taken from recently found master tapes for even better clarity. Access to the tapes revealed male duo Gene & Gary's version of the classic Danny Monday dancer aby Without You' and 'Get To Steppin'', a Jackie Day track recorded in a very similar vein to 'Naughty Boy', her Phelectron rarity. Johnny Copeland made a great version of 'No Puppy Love' as released by Jackie Paine on Jetstream, while the totally unknown Peggy Woods contributed a classic soul-girl stomper on 'Love Is Gonna Get You'. The originally unreleased version of Wally Cox's 'This Man' was recorded before his 1970 Wand release, although that actually sounds earlier.Group soul comes from the Brilliant Korners' rare and collectable final Modern release 'Three Lonely Guys', while Texas' Other Brothers left 'Nobody But Me', their best recording, on the tape shelf - it has grown continuously in popularity since its 1995 debut. There's a Mary Love classic and a great Arthur Wright instrumental version of her 'Lay This Burden Down' to round off a compelling compilation.A vinyl/only release compiled and annotated by Ady Croasdell.track listingSIDE ONE1.CAN IT BE ME / Mel Williams 2.I'VE BEEN HURT SO MANY TIMES / Larry Davis 3.LOVE IS GONNA GET YOU / Peggy Woods 4.LAY THIS BURDEN DOWN / Arthur Wright ^ His Orchestra 5.GET TO STEPPIN' / Jackie Day 6.THREE LONELY GUYS / Brilliant Korners 7.THIS MAN WANTS YOU / Wally Cox SIDE TWO1.WANTING YOU / Jimmy Bee 2.BABY WITHOUT YOU / Gene ^ Gary 3.SHINE IT ON / Vernon Garrett 4.NO PUPPY LOVE / Johnny Copeland 5.NOBODY BUT ME / The Other Brothers 6.HEY STONEY FACE / Mary Love 7.MAKE ME YOURS / Z.Z. Hill

Shake (usa)
Music Is The Only Way We Can Communicate