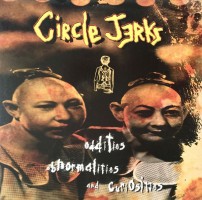 Originally released in 1995 and long out of print, "Oddities, Abnormalities & Curiosities" is the sixth and final studio album by the almighty Circle Jerks. It was also the first and last album the band recorded for a major label before splitting up (for the second time after their 1989 split) and showed them in top punk rock shape> with short, energetic explosions in the vein of their classic hardcore hits mixed up with "poppier" touches like the ones on their amazing cover of the Soft Boy's gem "I wanna destroy you". A magnificent effort by a classic band that never lost their magic touch, "Oddities, Abnormalities & Curiosities" is well worth rediscovering after all this years.

Circle Jerks
My Career As A Jerk

Circle Jerks
Wild In The Streets