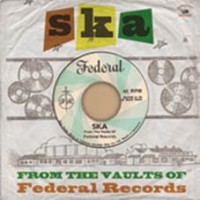 SKA was the name given to the music that came out of Jamaica between 1961-1966. Based on the American R&B and Doo-wop records that the Sound Systems in Kingston Town used to play. However, the American records style started to mellow out, while the Jamaicans preferred a more upbeat sound. So the Sound System bosses became record producers to cater for this demand. Sir "Coxonne" Dodd and Duke Reid led the way putting the top musicians on the Island in the studio to make music unmistakably Jamaican. A lot of their early recordings were cut at Federal Records before they built their own studios.Federal Records was the first domestic Jamaican studio, based at 220 Foreshore Road, Hagley Park, Kingston. It opened it's doors in 1961 owned by Ken Khouri who first licensed American records to the island of Jamaica, before cutting his own tunes, which were some of the first Jamaican RnB and Ska singles. Ken Khouri initial studio was Records Limited but very basic so with the help of engineer Graeme Goodall built the new studio complex at 220 Foreshore Road which also contained a pressing plant and disc cutting room. The studio was not only the forerunner for Ska music but the music that followed and in 1981 Ken Khouri sold the complex now on the renamed road Marcus Garvey Drive to Bob Marley who renamed the premises Tuff Gong Studios whose legacy carries on today.We have compiled some of the best SKA SOUNDS that came out of the Federal Vaults, with some of the best artists, musicians from the time. The great Lord Tanomo, Don Drummond, Rico Rodriguez, Roland Alphonso, alongside some lesser known artist. However, one thing is for sure, the quality never drops on this fine collection of Ska Hot Tunes..Hope you enjoy the set.. Tracklisting Track 1 AMBITION OF MEN/ REUBEN ANDERSON Track 2 COME DOWN/ LORD TANOMO Track 3 YARD BROOM/ ROLAND ALPHONSO ^ DON DRUMMOND Track 5 GOOD NEWS/ THE SKATALITES Track 6 BIRDS AND BEES/ FERDIE NELSON Track 7 PLEASE BEVERLY/ BIBBY AND THE ASTRONAUTSTrack 8 EASTERN STANDARD TIME/ LORD TANAMOTrack 9 LONELY AND BLUE BOY/ FERDIE NELSONTrack 10 LET GEORGE DO IT/ RICO RODRIGUEZTrack 11 SKA DOWN JAMAICA WAY/ FERDIE NELSON ^ IVAN JAPTrack 12 SWEET DREAMS/ BIBBY ^ THE ASTRONAUTSTrack 13 VALLEY OF GREEN/ JACKIE OPEL