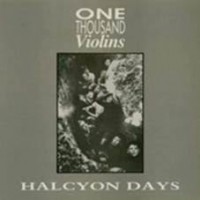 Their rst single, "Halcyon Days" was originally released in 1985. The B-side, "Like One Thousand Violins" was voted into that year's Festive 50 by listeners to John Peel's BBC Radio 1 show, the band having recorded a session for the show earlier that year. First time on 7" Part of The Optic Sevens Reissue Series. Limited to 500 copies on Splatter Vinyl Includes Poster & Postcard.