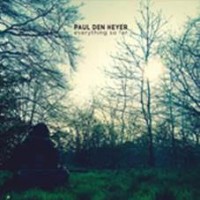 Den Heyer, Paul
Everything So Far

Paul Den Heyer is something of a supporting cast character in the North-West's music history, formerly a member of short-lived indie rockers Fishmonkeyman and then of The Red Sided Garter Snakes alongside ex-members of Puressence and Inspiral Carpets. He's now creating hazy guitar sketches in his own right - 'Everything So Far' is his debut solo release. He describes the style as ,"Britanicana" and indeed his music blends British folk songwriting with 60s&70s American psych-POP.