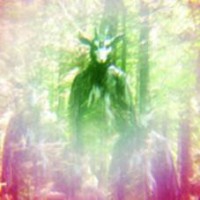 Heavily influenced by the horror writing of H.P. Lovecraft and 70s horror films such as Texas Chainsaw Massacre, 'Black Goat Of The Woods' by Black Mountain Transmitter was written to sound like the soundtrack to a lost lo-fi horror movie. It's the work of one man, J.R. Moore, and was originally released on CD back in 2010. It is now available on vinyl for the first time. 180g vinyl LP, limited to 300 copies.

Spotlights
We Are All Atomic