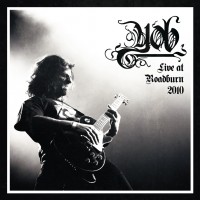 Repress!! New edition! Yob might be one of the best bands in North America," declared Ben Ratliff in a feature New York Times article in March of 2010 that can be best described as gushing. The Eugene, OR-based doom metal trio has seen similar praise worldwide, with a growing host of fans citing the band as one of the most profound and accomplished doom metal phenomena of the 21st century. In 2012 Yob did a 20 gig tour as support act for Tool in the US. Live at Roadburn captures the band on their first European tour on which they played the prestigious Roadburn Festival in Tilburg twice. This audio and video document captures the band in prime form in front of a raving audience. Probably one of their best gigs ever. This is the last installment in the Live at Roadburn series on Roadburn Records in which earlier sets from Wolves In The Throne Room, Church Of Misery, Neurosis and Wino heeft seen the light of day.