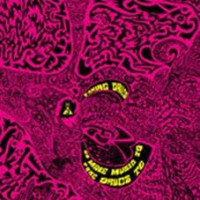 Re/release, digitally re/mastered featuring Sonic Boom and Jason Pierce. The origi/nal appearance of Taking Drugs was a bootleg on the legendary&notorious Father Yod imprint in 1990, later supplemented with contemporary outtakes and cuts for the Bomp reissue in 1994 and one further song for the Space Age version in 2000. The original seven tracks, dated January 1986 and the first recordings to feature Pete Bain on bass, are collectively known as the Northampton Demos. Both Sonic and Pierce have been on record as long preferring these takes to the eventual versions that surfaced for the most part on Sound of Confusion. Certainly it-s a fine set of per/formances, showing a definite step toward the more familiar sound of the group and away from the rougher takes on For All the Fucked Up Children of the World. @The Sound of Confusion,@ aka @Walkin- With Jesus,@ rips along with fierce energy, Pierce-s singing and the rampaging, primitive wail and rumble of the band just wonderful. @Losing Touch With My Mind@ takes things to an even higher level, a huge wallop of feedback and beat *Natty Brooker-s drumming in particular delivers just what the doc/tor ordered(, Pierce delivering the lines with a flat, cutting drawl. On the slightly lighter tip, @Come Down Easy@ is more or less fully in place *aside from singing about it being 1986!(, possessing a more upfront but less vocally distinct feel than the Perfect Pre/scription take. The tracks that surfaced on the later reissues come from a variety of different sessions, including the original take on @Feel So Good@ and a good live version of @Things-ll Never Be the Same,@ one of several cuts featuring Brooker-s drumming replacement Rosco.