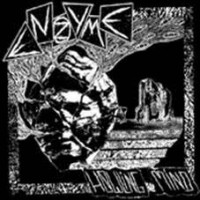 After two 7's on Crust War and Hardcore Victim and a Tour flexi in Japan on Vox Populi Records, Australian noise-punx Enzyme release their debut 10 track album. The band made up of ex members of PISSCHRIST, KROMOSOM and UNKNOWN TO GOD worship at the altar of Perdition era DISORDER, CHAOS UK and CONFUSE. The bass drives the sound, the drums hectic with a lot of rolling tom tom work whilst the guitar has an immense tone of buzzing distortion and flanged psychedelics which sits somewhere between GLOOM and LES RALLIZES DENUDES. Pummeling, assertive one-two hardcore with a visceral-physical without stupidity, clever but unpretentious venomous vocals.Recorded by Jason Fuller at Goatsound and mastered by Shige at Noise Room Howling Mind comes with sleeve and 16 page booked designed by Zach Malakonas.