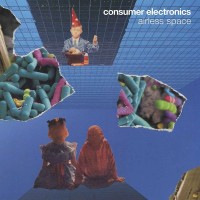 Consumer Electronics return with a double album of all new studio recordings produced by Russell Haswell. Some wondered how the songwriting team of Philip Best and Sarah Froelich would fare after the leaving their London home to take up residency in the United States. Well, here's the answer. Recorded in San Francisco, CE deliver "Airless Space",a state/of/the/union address that does for our American cousins what the band's earlier "Estuary English" album did for a British audience poised upon the coming madness of Brexit. Unusually for CE, "Airless Space" clocks in at 60 minutes, a hexed induction for a country labouring under a presidency, that like Brexit itself, few saw coming or contemplated having to endure. Soundwise, CE have maybe mellowed the tone a touch, allowing their electronics to stretch out and breathe, whereas the frenzied and anxious vocals of Best and Froelich remain as snatched and breathless as ever. Stunningly produced by Russell Haswell and gorgeously mastered by award/winning cutting engineer Matt Colton, "Airless Space" by Consumer Electronics is their most complete and rounded statement yet.