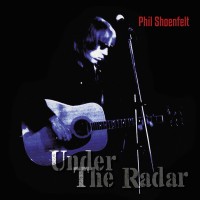 Shoenfelt, Phil
Under The Radar

Retrospective album for Phil Shoenfelt, a veteran of the London, Manchester and New York Punk and goth-rock scenes, spanning throughout his whole career, from his early days as founding member of the post punkers Khmer Rouge, through his collaborations with the likes of Nikki Sudden, or the Bevis Frond. Released on the German archival label Last Years Youth in a mere 500 copies.