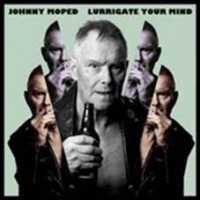 Johnny Moped's first album since 2016's 'It's A Real Cool Baby'! There's a guest appearance from none other than Captain Sensible, a longtime friend and champion of the band. The original Mopeds Johnny and Slimy Toad have been joined by long time members, Jacko Pistorious, Rock-N-Roll Robot (also know as Rob from legendary ska-punk band Case) and Marty Love for this album. It was recorded at Panther Studios, Reigate and produced by longtime associate Dick Crippen.