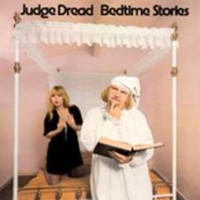 Taking his stage name from a classic Prince Buster song, Judge Dread (born Alexander Minto Hughes) was one of the most popular UK reggae artists of all-time. Known for his salacious humor and over the top live shows Dread was a favorite among UK rude boys. The year 1975 was a big one for Judge Dread, he released several highly charting singles, including his over the top rendition of Serge Gainsbourg's sultry classic "Je T-Aime" and the naughty holiday classic "Christmas in Dreadland". The album Bedtime Stories, originally released late in 1975 reached the Top 30 of the UK charts. Featuring those singles and a host of other Dread classics, the album showcases Judge Dread's unique brand of braggadocio mixed with self-deprecating humor. Another UK reggae classic from Judge Dread reissued by Radiation.

Judge Dread
Dreadmania (it's All In The Mind)