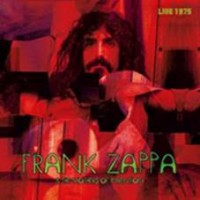 Frank Zappa at one of the very peaks of his genius! The 1975 version of the Mothers of Invention was an extremely tight combo featuring Napoleon Murphy Brock (saxophones), Roy Estrada (bass, vocals), Andre Lewis (keyboards), and the young and already fabulous Terry Bozzio on drums. The band was in superb form as was Zappa himself on guitar and vocals. The chosen repertoire was a great mix of both old songs such as "Duke of Prunes" and new material, including a very rare performance of "Sleep Dirt". A must for all Zappa fans! Tracklist Vancouver BC Apostrophe Duke Of Prunes Baby Don-t You Want A Man Like Me The Illinois Enema BandiSwallow My Pride Take Your Clothes Off When You Dance What-s The Ugliest Part Of Your Body Chunga-s Revenge Carolina Hardcore Ecstasy Lonely Little Girl Any Downers Zoot Allures T-Mershi Duween Sleep DirtBlack Napkins I-m The Slime