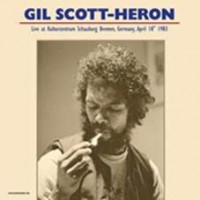 One of the great figures in the history of soul and funk music captured live in Germany in 1983. This is a double LP set of Gill Scott Heron and his eight piece band. Amnesia Express was a fine collective with reeds, trumpet, bass, percussion, drums and Gil Scott-Heron himself on Fender Rhodes piano and vocals. The album opens with a breathtaking solo performance of "We Almost Lost Detroit" and includes, among others, another masterpiece, "Winter in America". No words, just deep soulful and politically conscious music at its best.Tracklist We Almost Lost Detroit Three Miles Down Winter In America Angola Louisiana A Legend In His Own Mind Washington D.C.The Bottle Better Days AheadJohannesburg

Scott, Gil-heron
Pieces Of A Man