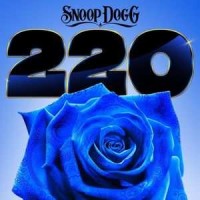 Snoop Dogg is a legendary personality. He burst on to the scene in the early 90's and stole the show with his appearances on Dr. Dre's classic album, The Chronic which cemented him as a prominent figure within the halls of hip hop. Since then he has gone on to release multiple platinum albums, star in major motion pictures, and even host a TV show with the one and only, Martha Stewart! 220 was an EP that was released by Snoop in 2018 a sa follow up to Neva Left.