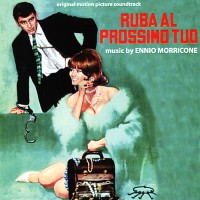 Digitmovies presents on LP the original motion picture soundtrack by Ennio Morricone from the movie "A fine pair" ("Ruba al prossimo tuo"). Only 300 copies!!SOUNDTRACKEnnio Morricone wrote a monothematic score including several orchestral variations of the main theme, a brilliant and very romantic motif with Lounge flavour, vocalised by I Cantori Moderni di Alessandroni. Introduced first in "Titoli di Testa" and reprised with several variations throughout the score> a Classic style version with harpsichord, organ and mandolin, a slow and dreamy one with the voice of Edda and also including the choir I Cantori, a samba version, a beat-flavoured mysterious version, another version once again with the splendid magical voice of Edda and a slower variation with the whistle of Alessandro Alessandroni. The style of Ennio Morricone strongly recognizable in a second theme, very romantic and lounge, featuring a keyboard used by the author, frequently also in other scores like "Giu la testa". A classic-style minuet with the opera vocalism of Edda enriches the score. The third theme is a brilliant orchestral samba introduced by the type machine and developed by the whole orchestra and then reprised with the performance of the wonderful Cantori Moderni. Our LP also contains three superb "shake" dancefloor music themes that bring us the unforgettable Beat atmospheres of those days' discoteques.