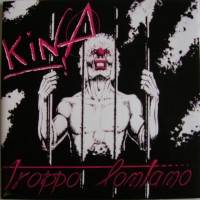 Originally released 23 years ago on CD , "Troppo lontano e altre storie" is finally reissued on LP for the first time. 13 remastered tracks produced between 1986 and 1994 by the Italian seminal Hardcore Punk band. Here you can find in detail, the complete versions of three tracks recorded live in Lubeck (D) during the 1986 European tour and previously issued on 7". Four songs from a series of acoustic sessions recorded in 1988 and previously issued on singles and compilations. Four songs produced with Stefano Giaccone and Lalli from "Ladiserzione degli animali del circo", the 1989 Kina & Howth Castle 12". A song from the Kina & Act 1990, split single, and finally the 1994 recordings featuring Marco Brunet on guitar and vocals. In the original 1996 liner notes, Kina wrote - All these recordings have been published on records that will never be reissued again. Hopefully you will be pleased to find them all together in this collection. Now, if we compare the first and last piece, we'll find a big difference in terms of sound and playing quality. It's still us though, luckily we grew up and we've changed too, and we're so proud and happy of our past and present. Always yours Sergio, Alberto, Gianpiero, Marco, Stefano and Lalli.