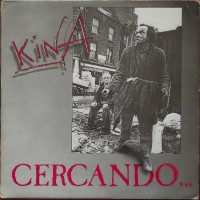 One year after the release of Kina-s first album, Irreale Realtà, which was a good proof of the Italian Hardcore scene vitality and a confirmation that Kina was definitely one of the most original and creative bands on the European scene.Even though, 1986 was a transition year. Punk began to loose its energy and while many of the bands from the first wave were gone, Kina decided to work on their second album, and for this they chose a studio owned by a former Hippy- in Aosta. They entered the studio with very clear ideas. Velocity? yes! just a little bit less than before, Melody? yes, and in this case a little more than before! Solos? Sure! and wild too, Short songs? Of course, even if now they feel like trying something different as well. After one month of studio work, they finally got a concise and intense album. Some kind of raw and rusty thing coming from big and extremely loud amps. The new path seems to allow the band to explore new sound territories where a new kind of melodic lines mix up with past experiences and new genres, Metal included. It's a sad and dark sounding album including songs which would become classics in the band-s repertoire. And what about the artwork? The front cover album has a very, very strong image! An airbrush retouched picture - by Salvatore Cosentino - of an angry homeless who almost seems coming out of the cover.