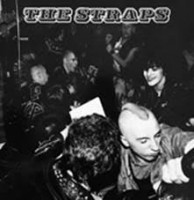 The Straps are an English streetpunk band, formed in 1978 in Battersea, South London by vocalist John Grant (aka Jock Strap) and guitarist Dave Reeve.The band's debut album was issued in 1982 on the Cyclops label. The album featured UK Subs drummer Pete Davies (Walker only played on one track, departing for the Human Condition) and guest appearances by Andi Sex Gang and the Damned's Rat Scabies.

Spivs
The Crowds And The Sound

Lemonheads
Laughing All The Way To The Cleaners