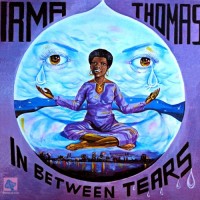 Known as the "Soul Queen of New Orleans," Irma Thomas was born Irma Lee in the town of Ponchatoula, Louisiana, in 1941. After singing in the local Baptist church, she auditionedfor Specialty Records on the cusp of her teens, working as a waitress, she occasionally sang with blues veteran Tommy Ridgley, who helped broker a record deal with the short lived independent, Ron Records, for her debut single, "Don't Mess With My Man," released when she was only 18 years old, which reached the number 22 position on the Billboard chars. The singer's tumultuous private life sometimes disrupted her career, by the age of 19 she had four children and had already been married twice, the last name of her second ex-husband becoming her permanent stage name. In 1961 she signed with the Minit label, where she worked closely with gifted arranger Allen Toussaint, and when the Hollywood based Imperial took over Minit and then became part of Liberty Records, her profile increased dramatically, "Wish Somebody Would Care" was an outstanding chart topper that led to her debut album and her scorned original, "Time Is On My Side," inspired an enduring hit interpretation by the Rolling Stones. Sophomore album Take A Look surfaced on Imperial in 1966, but unfortunately, subsequent work for Chess was far less successful. After signing to the Canyon label in 1970, Thomas cut a couple of singles in Macon, Georgia, with Jerry Williams Junior, a singer and producer from Portsmouth, Virginia that issued gritty, lewd funk under the alias Swamp Dogg, though the singles sold well in the south, they were largely overlooked elsewhere. Nevertheless, Williams brought Thomas to Muscle Shoals, Alabama to record the album that would eventually surface as In Between Tears, but the collapse of Canyon delayed its release until 1973, when Williams issued it on his Fungus label. This long awaited vinyl reissue on deluxe 180gr format comes complete with 4 bonus tracks.