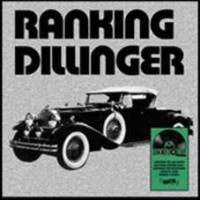 Top-ranking toaster Dillinger, aka Lester Bullock, is among the most versatile and popular of all the Jamaican deejays. Displaying an ease of verbal dexterity at the microphone, he can attack any subject under the sun with wit and skill. Emerging from a ghetto area near Waltham Park Road in western Kingston, he began as a protégé to Dennis Alcapone on El Paso sound system, where he was known initially as Alcapone Junior, later switched to Smith the Weapon, based in nearby Payneland. Recording a glut of material for Lee Scratch' Perry under the name Young Dillinger in the early 1970s, he also cut sporadic work for Winston Riley, Prince Tony Robinson, Phil Pratt, Enos McLeod, Augustus Pablo and Yabby You, among others, his debut album, Ready Natty Dreadie, surfacing from Studio One. Although Channel One broke him into the mainstream with "Cokane In My Brain" and the CB200 LP, his longstanding connection with Bunny Lee resulted in all kinds of noteworthy material. None Stop Disco Style is the American issue of the 1977 release also known as Talking Blues, though slightly reedited for the US market< with every track presented in "showcase" style with an extended dub portion, it has excellent Dillinger workouts of Johnny Clarke favourites such as "Roots Natty Roots Natty Congo," "Give Up The Badness" and "Nobody's Business." Killer! Pressed in a limited edition of 300 copies on military green and white vinyl LP for RSD 2019.Track list Side A A1 African World Wide A2 Into The African Dub A3 Truth And Right A4 The Right Dubwise A5 Don't Take Another Man's Life A6 Man Size Dub Side B B1 Jah Show Them The Way B2 12 Tribe Dub B3 Trial And Crosses B4 Into Bradforth Dub B5 See And Blind B6 Striker See Ya Dub Ya