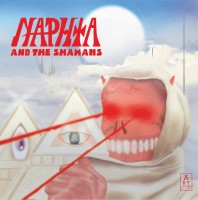 Naphta was born in 1978 but differently from the most of other bands from Bologna at that time, they came up with a very peculiar Jazz Rock formula mixed up with elements from the almost "out of time" Progressive genre.The result was unsettling! Their music was mostly improvised with no apparent distinctions between rhythm section and soloists, in fact everybody in the group could have taken a solo at any time but in close relation with the others. All members in the group were classically trained musicians who were in full control of their actions, all except the singer Marco "Cigaro" Cigarini whose vocal work and his nonsense lyrics were the most far out aspect and possibly the most fascinating element in the mix. Such music was probably too demanding for the general audience's attitude of the time and the band disappeared not so long after the release of their excellent tape. If compared to the original cassette, the present LP reissue includes two extra tracks, "La femme Fatale" and "Tac", a couple of unearthed pieces which complete the picture of one of the most unconventional creatures in the history of Italian underground music.