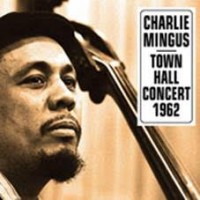 For this legendary Town Hall Concert recorded on October 12, 1962, the great jazz composer and bassist Charles Mingus brought together an amazing lineup spanning the totality of the nation's jazz scene with such luminaries as Eric Dolphy, Buddy Collette, Clark Terry, Zoot Sims, Pepper Adams, Jaki Byard, Grady Tate, and more. Brought together to perform new Mingus compositions for the first time in public, the recording was initially considered weak due to limited rehearsal time but the years have been kind to this recording and it's a fantastic set of Mingus compositions, including the powerful "Freedom" which rivals the works on Mingus Ah-Um for its strength of purpose and message, in a similar vein to Max Roach's legendary We Insist! album. Mingus is one of the most important figures in 20th Century music and this live recording documents his compositional and arranging prowess as well as sheer swinging joy. Essential.