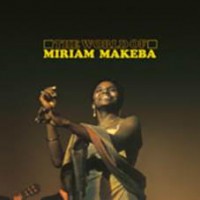 The brilliant South African singer Miriam Makeba first found international recognition after being "discovered" in America by the wonderful Harry Belafonte who inspired her move to NYC and championed her talent to anyone who would listen. A subsequent recording contract began her half-century long career of international stardom. Combining afro-pop with jazz and western pop music influences, Makeba created a sound that was uniquely her own and inspired generations of singers to come. A life-long anti-apartheid activist and humanitarian, Makeba is recognized around the globe as being one of the most important singers of the middle 20th-century. With conducting assistance from the legendary South African trumpeter, Hugh Masekela, this is Makeba's 3rd album, originally released in 1963, and a stunning example of of her modern afro-pop sound. A perfect record.