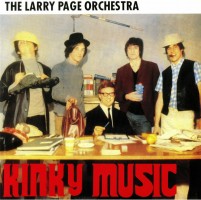 Aspiring Welsh pop singer Leonard Davies became Larry Page in the mid 1950s, when Columbia Records issued his material on 78s and 45s, including a cover of Buddy Holly's "That'll Be The Day", he also played banjo in the Crane River Jazz Band. Known as "Larry Page the Teenage Rage," he toured Britain with Cliff Richards and regularly appeared on national television. Shifting to a management and record production role in the early 1960s, he struck gold in 1964 upon signing a management contract with a band called The Ravens, who he re-named The Kinks, which swiftly became one of the most popular acts of the day. Noting that Rolling Stones producer Andrew Loog Oldham had formed his own orchestra to cut orchestrated versions of Stones hits, Page put together the Larry Page Orchestra for debut disc, Kinky Music, which similarly reconfigured the Kinks' work. A pleasant romp through first phase Kinks classics, it is also noteworthy as an early showcase for future Led Zeppelin guitarist, Jimmy Page.

Various
Music Is My Life