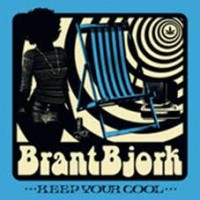 "Keep Your Cool" marks itself as easily one of Bjork-s most accessible and catchiest album. A direct continuation of the raw, straight to the point rocker that was the "Brant Bjork and The Operators" record, it also brings back some of the more relaxed, levitating aura of "Jalamanta" resulting into a best of both worlds scenario. Starting out with funky guitar rhythms and congas "Hey, Monkey Boy" is a short and entertaining opener that sets up the stage to the other tracks. The songwriting for the most part is as about simple as it can get, with mid-paced, often blues&funk influenced riffs leading them, accompanied with Bjork's relaxed, swagger-filled vocals. But don't mistake this for laziness because these are well-written and effective riffs that are delivered with crystal clear precision. Thus with songs "Johnny Called" or "Gonna Make The Scene" Brant proves that you don't have to go for 10] minute long, abstract feedback' driven jamming to deliver good stoner rock. A good headbanger" A soulful ballad" A relaxing, acoustic guitar piece@ "Keep Your Cool" has all of them. No to mention sweet guitar licks, a beefy production and a great, positive vibe that oozes from the 70's and weed *especially in the Cream-like "I Miss My Chick"( With eight songs and 33 minutes it's short, sweet, delivers the punch and keeps up its replay value high. "Keep Your Cool" is like every Brant Bjork record, The honest sound and music of a dude that you would want to hang out and party with.