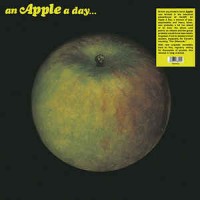 British psychedelic band Apple was formed in the industrial powerhouse of Cardiff, north Wales, in 1968 by guitarist Robbo Ingram and bassist Jeff Harrad. Joined by drummer Dave Brassington, keyboardist Charlie Barber and singer Dennis Regan, their debut single "Thank U Very Much," arranged by session guitarist Big Jim Sullivan, sparked the interest of Larry Page, who signed them to his Page One label to cut the debut album An Apple A Day with producer Caleb Quaye (the son of the multi instrumentalist Cab Quaye and older brother of future singer Finley Quaye). Unfortunately, Apple's mixture of pop, psychedelia and heavy blues was probably a bit too ahead of its time< the album sold poorly on release and the group proba bly would have been totally forgotten, if not for belated critical acclaim, especially for Harrad's haunting "The Otherside." With rare originals incredibly hard to find, regularly selling for thousands of pounds, this reissue is long overdue.

Dark
Round The Edge