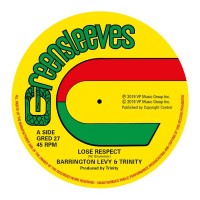 First time re-issue for this golden age righteous rastaman business from Barrington Levy ^ Trinity. In the rockers era Trinity cemented his place as the number one deejay scoring countless hits and becoming almost an almost essential ingredient on the onslaught of discomixes from yard. Moving into production with his own Flag Man label this 1979 crucial combination killer with Barrington ,Lose Respect" was also the first in a long parade of Mr. Levys 12" inch single hits for Greensleeves Records. The flipside features the soulful lovers rock lick of ,Since You Are Gone" & ,Give Love A Try" from Roman Stewart & Trinity to rival the previous and much loved versions by Delroy Wilson, Pat Kelly & David Isaacs.

Levy, Barrington
Too Experienced - The Best Of Barrington Levy