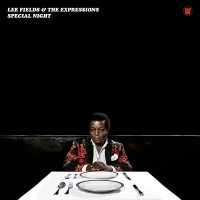 Special Night is a masterclass in soul music past and present. Produced by Leon Michels and Thomas Brenneck, and brilliantly performed by the Expressions, Special Night was written, recorded, mixed, and mastered entirely to tape in three weeks at the legendary Diamond Mine Studios in Queens, NY. A sense of urgency, equal parts fun and inspiration, and a decent amount of beer and Jack Daniels were the driving forces during the sessions that produced Lee Fields & The Expressions latest offering. Special Night is also the first record in the Expressions catalogue in which every song was written jointly by Lee Fields and The Expressions. Whether tackling a tune about love lost, found, or broader topics like the state of humanity, Lee has a very unique and honest perspective tat is on display with each unforgettable performance. Also, The Expressions have never been sharper, they, along with Lee, have created a collection of music on Special Night which holds court with pretty much any soul music that came before it.

Fields, Lee & The Expressions
Wake Up