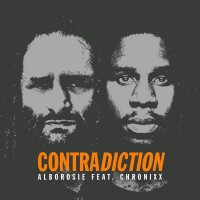 "Contradiction" (feat. Chronixx) is the latest single from the successful album "Unbreakable - Alborosie Meets The Wailers United" and the the official music video was released mid november and is currently approaching 400k views on the artist's own YouTube channel. On the 7th of december, Alborosie premiered a "making of video" for the dub version of "Contradiction". The music from that live dub recording is now mastered and presented as the exclusive B-side on the 7" inch single which will be released as limited edition, black vinyl with custom label printed in a picture sleeve!