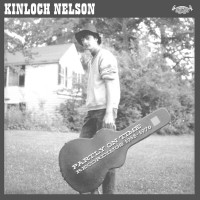 Unheard 60's recordings by the Secret Rochester, NY Guitarist. Kinloch (sounds like "kin-law") Nelson studied classical guitar privately with Stanley Watson in Rochester NY, jazz guitar with Gene Bertoncini at Eastman School of Music, and music theory at the University of Rochester. In 1973, he began teaching both privately and at The Hochstein Music School in Rochester where he was on the faculty for twenty-five years. In 1985, Nelson co-founded the Guitar Society of Rochester, which during its ten-year run presented many of the world's greatest guitarists. Nelson is the author of a book, Alternate Guitar Tunings. He currently teaches privately, conducts guitar workshops and maintains a performance schedule. Nelson came to the attention of Tompkins Square via Duck Baker, who visited Rochester in 2018 supporting his own Tompkins Square archival release, 'Les Blues Du Richmond Demos & Outtakes, 1973-1979'.

Holcomb, Roscoe
Across The Rocky Mountain