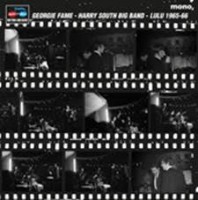 Georgie Fame's story - chart-topping popular artist with underlying jazz sensibilities - is all too well known to be retold here, but it-s worth pointing out that his transition from pop star to jazz vocalist owed much to his exposure to the music of the Dick Morrissey Quartet. Indeed two of the Blue Flames greatest drummers Phil Seamen and Bill Eyden were both poached from Morrissey's group. The pianist in the Quartet was Harry South, and when Fame decided to pursue his wider musical ambitions, he chose South and his big band as his collaborators, creating the album Sound Venture, a cross-over classic that has become one of the iconic LPs of the decade. This LP, South Venture, assembled from South's own tape archive, features a wealth of PREVIOUSLY UNISSUED material and can be seen as a sequel to that landmark achievement. And we have added a long-forgotten addition to the story of the Blue Flames - a session Georgie and the boys cut in February 1966 backing Lulu. Listen and enjoy!

Excitements, The
*the Mojo Train