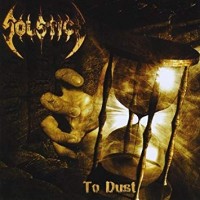 Perhaps the most underrated band to ever arise out of the late 80s Florida scene, Solstice released two hellfire metal albums before disappearing completely. Now they're back and better than ever. Yes, "To Dust" is every bit the equal of their first two records and superior to just about every reconstituted death & thrash offering released in the past few years. Whereas other bands have shat all over their legacy with lukewarm platters of mediocrity, Solstice stands primed, as ferocious and passionate as ever. Since Solstice never got the sales or acclaim they deserved, it is hard to judge just what the future holds for them. Whether this is a one/off or a full/time return to duty. Either way, "To Dust" is one molten slab of excoriating, satisfying death metal !