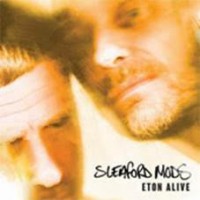 The fifth studio album from never-knowingly-short-of-a-pun duo Sleaford Mods is on their own new 'Extreme Eating' label following a relatively brief sojourn with Rough Trade. Eton Alive is an aptly-titled affair in a year when which the actions of certain Old Etonians are in real danger of tearing the United Kingdom apart. Be assured that Sleaford Mods will have plenty to say on the subject of Brexit, austerity, and pretty much everything else related to the "shit pipe of this tatty civilisatio"- all splurted out in their usual inimitable rattle-and-rant style.